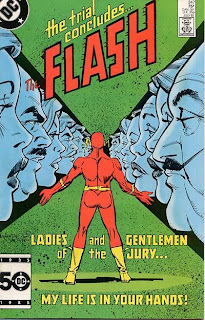 The above is the cover to the first ever Flash comic book I owned. As a child it was a powerful image. I was just learning to read at the time and I didn't understand even half of what was going on inside the book because it was (unknown to me) heading towards the end of "The Trial of The Flash" storyline, a multi-part epic that would end out the book. It was the cover that always stuck with me though. Here was a superhero, defined by super speed, standing still and facing not a super villain but a jury who were deciding his fate (at the time, The Flash was on trial for having murdered his arch-enemy the Reverse-Flash). The red and yellow costume, the idea of a character who run at super speed, who had a colorful assortment of villains in his Rogues gallery, all appealed to me. Even his name, The Flash, sounded cool. So much so that I named my first dog (a doberman) after him.

For reasons now lost to the mists of time (and my poor memory of events) the comic left my possession (did I give it away? Did my mom throw it out? Was it stolen?) along with a number of others.  Comic books were hard to come by back in those days (I lived in a very small town and there weren't any comic shops back then, just the odd convenience store or drug store that sold comics) but I managed to find the Flash again, albeit in a much different costume and with a few friends thrown in for good measure. 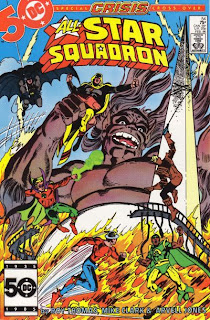 This was my first encounter with the heroes of Earth 2 and here was a completely different Flash. Different costume, different identity, different time period. The only thing similar about them was their superpower and their code name. Instantly I liked this Flash. He had a sense of humor about him the other one didn't. He had a cool helmet. He didn't hide his face (shockingly, his girlfriend, whom he rescued from being run over by a train, knew his secret identity, which immediately made her more interesting to me than Lois Lane). I read a few other issues of All-Star Squadron which featured Jay Garrick, but this is still my favorite (also one of my favorite comic books ever) and that cover still looks cool. I knew Jay Garrick's name before I knew Barry Allen's, because I really hadn't read too much of Barry's adventures at this point. I didn't even know that "Barry Allen" was the secret identity of the first Flash I had read about. So when my mom picked up another Flash comic book for me a year or so later, I had no idea at first that it was a completely different character wearing the same costume. 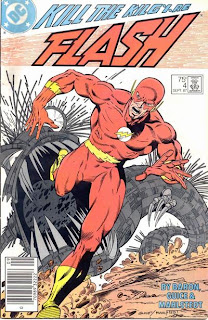 As I said above, this wasn't the first comic book I ever owned. It wasn't even my first Flash comic. It was, however, the comic book that made me fall in love with comic books. I had read others before it, but this is the one that really started my fascination/obsession/addiction with comics. The cover, as it should, is what struck me first. Again, that familiar costume, but in the background a monster chasing him with a mouth that could swallow a truck. A monster that could run as fast as "The Fastest Man Alive"? Incredible. Inside, The Flash and his guest-star Cyborg battled against an alien intelligence that could possess machines and create android duplicates of human beings.

I didn't realize it until the next issue, but this Flash was Wally West and he wasn't able to run as fast as the previous Flashes. Starting with issue #5, he began having an affair with a married woman, he was rich and lived in a mansion and had to deal with monsters and super speed villains pumped up on steroids. He was also a member of the "New Teen Titans" rather than the Justice League or Justice Society (which I was vaguely familiar with at this point). Wally would go on to become my favorite Flash. I'm not sure what it was exactly about him that appealed to me at that age (aside from the costume and super powers) but I always felt a connection with him. Maybe it was because neither of us got along with our fathers (his was an evil Manhunter, mine was more concerned with his tools and tractors than he was with his family) or maybe it was because we were both hotheads. As Wally grew and matured as a character though, so did I as a man.

Since then I've read/collected every issue of Wally's series, quite a few issues of Barry's (original) series and stuck with the Flash through three (four?) reboots. Through Bart Allen (Barry's grandson from the 30th century. Long story.) taking over the mantle of the Flash for a very brief time to Barry's return from the dead I've seen these characters and this franchise through a lot.  The current Flash series, this time starring Barry Allen again, isn't really my cup of tea so far. I like what's been done with the villains, but I wish they'd put more effort into making me care about Barry as a character again (he had been dead for 20 plus years and I barely knew him before he died). That said, there is something about that red and yellow costume and the idea of a guy who runs super fast that keeps bringing me back, no matter who is under the mask/helmet.

So this post is hereby dedicated to The Flash (all of them) and to one of my favorite websites, http://speedforce.org/ , which celebrates it's fourth anniversary today. Long live The Flash! 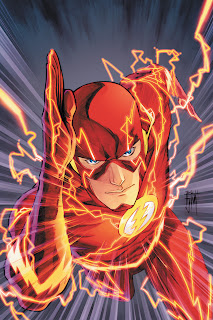